Add Traces the outline of all objects as if they were a single, merged object. The resulting shape takes on the paint attributes of the top object.

Subtract Subtracts the frontmost objects from the backmost object. You can use this command to delete areas of an illustration by adjusting the stacking order.

Minus Back Subtracts the objects in back from the frontmost object. You can use this command to delete areas of an illustration by adjusting the stacking order.

Divide Separates a piece of artwork into its component filled faces (a face is an area undivided by a line segment).
Note: When you use the Divide button in the Pathfinder panel, you can use the Direct Selection or Group Selection tool to manipulate the resulting faces independently of each other. You can also choose to delete or preserve unfilled objects when applying the Divide command.

Crop Divides artwork into its component filled faces, and then deletes all the parts of the artwork that fall outside the boundary of the topmost object. It also removes any strokes.

Outline Divides an object into its component line segments, or edges. This command is useful for preparing artwork that needs a trap for overprinting objects. (See Create a trap.)
Note: When you use the Outline button in the Pathfinder panel, you can use the Direct Selection or Group Selection tool to manipulate each edge independently. You can also choose to delete or preserve unfilled objects when applying the Outline command.

Soft Mix Makes the underlying colors visible through the overlapping artwork, and then divides the image into its component faces. You specify the percentage of visibility you want in the overlapping colors.

Trap Compensates for potential gaps between colors in artwork by creating a small area of overlap (called a trap) between two adjoining colors.

A clipping mask is an object whose shape masks other artwork so that only areas that lie within the shape are visible—in effect, clipping the artwork to the shape of the mask. The clipping mask and the objects that are masked are called a clipping set. You can make a clipping set from a selection of two or more objects or from all objects in a group or layer. 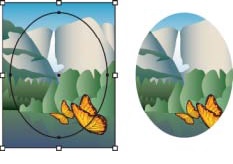 Before masking (left) compared to after masking (right)

Tip: To create a semitransparent mask, use the Transparency panel to create an opacity mask.

For more information on using masks and transparency, see www.adobe.com/go/learn_ai_tutorials_mask_en.